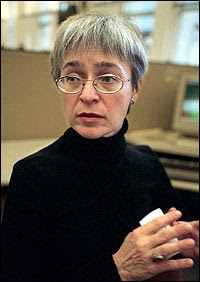 Today is the first anniversary of the murder in Moscow on October 7, 2007, of the Russian journalist Anna Politkovskaya, who did more than any other reporter to reveal the true extent of the excesses of violence and brutality wrought by Russian federal forces and their allies in Chechnya.

To commemorate the anniversary, events are being held in many cities around the world. They include Paris, London, New York, several Italian cities, Stockholm, Oslo, Hamburg, Copenhagen, Krakow, Vienna, Prague, Moscow, and Nazran. For an extensive list, see the Prague Watchdog calendar for October.
Posted by David McDuff at 9:34 am