Eugenia Tymoshenko is interviewed by the BBC's Stephen Sackur on Hardtalk:

Posted by David McDuff at 8:36 am No comments: 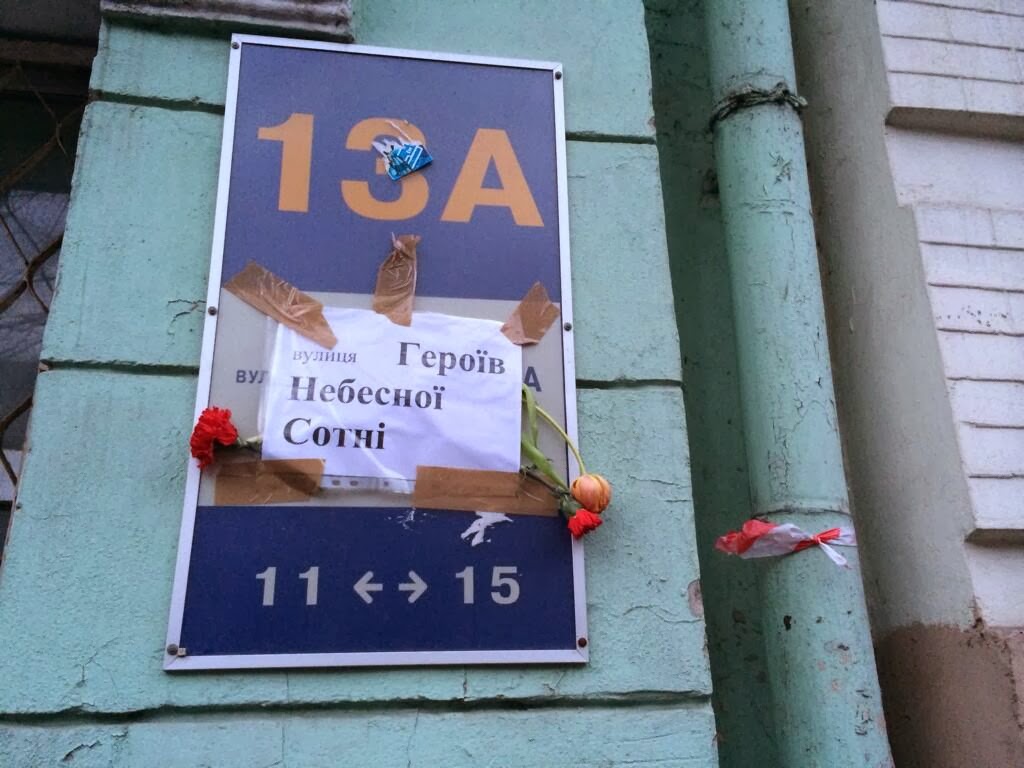 Posted by David McDuff at 3:52 pm No comments:

Below are some fragments in English, mostly translated from Ukrainska Pravda's report. The whole speech covers much more ground  - when a complete transcript becomes available, I will hope to post it.

"Today you and I have a few important things to do. First – under no circumstances do you have the right to withdraw from Maidan until you have completed all that you planned to do in Ukraine.

"If anyone tells you that you have already done your job and can go home, and that everything will be made fine and dandy for you here – do not believe such claims, do not believe a word of it.

"Until you have completed the job to the end, to the last step, none of you has the right to leave. Because it is you who have changed everything, not the politicians, not the diplomats, not the world, none of them was able to do it.

"We have to do a few important things, one of which is to bring Yanukovych and all that trash that had gathered around him, to Maidan.

"When the snipers fired their bullets into the hearts of the young men who were slain, they fired them into the hearts of everyone. And if those who organized it and carried it out are not punished with the toughest and most severe justice, you and I will not be worth anything. If we let them escape responsibility, if we forgive anyone who fired a bullet into the hearts of our heroes – we will live in shame for ever.

"Those who perished will be our responsibility for each step we take next.

"I understand that  that people have stopped trusting politicians.

"I will be the guarantee that you will know what is going on behind the scenes ....  I do not only repent, I ask for your forgiveness for all politicians, no matter to which party they belong.  I want to say on behalf of them  all - the politicians were not worthy of you, of your blood. I want to do everything to see to it that you will see different politicians , officials, functionaries. And to make you part of building a new country.

"If the new parliament, the new government are formed without you - it would be unacceptable.

"I am going back to work.  I will not let a single minute pass without making you feel  happy in your country."

Posted by David McDuff at 10:44 am No comments:

Posted by David McDuff at 6:39 am No comments:

As events in Ukraine once again enter a critical phase, it seems evident that the current upheaval, now in its third month, was triggered by the Kremlin in the hope of starting a civil war in the country. This conflict it intended to use as a bogeyman in order to suppress dissent in Russia itself. However, the  plan appears to have backfired: instead of a civil conflict, what has emerged in Ukraine is akin to a social and political revolution involving all layers of Ukrainian society in resistance to a tyrant-President and a government that has lost all touch with the electorate.

At present it’s still unclear what direction the new Maidan movement will take. As the Yanukovych regime applies brutal force under the Kafkaesque pretext of “anti-terrorist operations” – thus branding Ukraine’s own people “terrorists” – the peaceful opposition still has to overcome and reconcile its own internal divisions. It’s uncertain whether by the end of the present crisis the leaders of the resistance will be the same as the eloquent but somewhat disconnected figures who have so far emerged, or whether other hands and voices will eventually take command. What is clear, though, is that this is a people’s movement: a movement that reflects a widespread discontent and anger among all age-groups and social classes with the corruption and self-seeking of the political establishment that has gripped Ukraine in a stranglehold. As a protester says of Yanukovych: “We cannot trust him. There can be no compromise with a dictator. He must go.”

In opting for violence as a solution to its unpopularity, the Kyiv regime may have badly miscalculated, for the violence and its consequences can be redirected back to it, and may soon destroy it. With pressure exerted by the EU and the United States, and by world public opinion, the regime's international legitimacy is likely to be further eroded and undermined. Instead of the “East-West” conflict scenario envisaged by the Kremlin and its Ukrainian clients, a national uprising has the potential to sweep first through Kyiv, then through the other cities and regions of the country, and finally over the border into Russia, where it may threaten Putin himself.

Posted by David McDuff at 4:11 pm No comments: 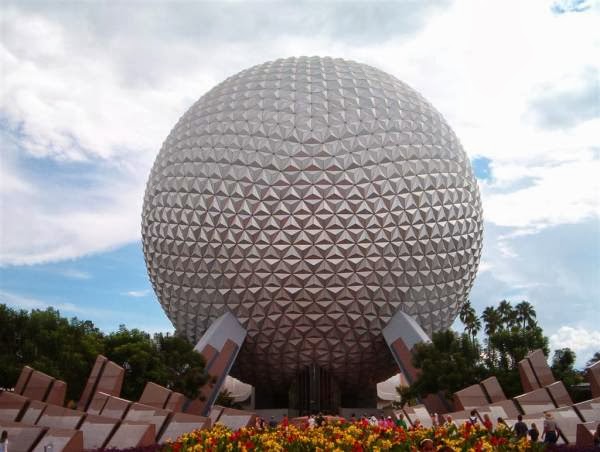 The science - or some would say the art - of futurology emerged as an academic or semi-academic discipline in the 1960s under the influence of writers like Herman Kahn, Dennis Gabor, Wendell Bell and Buckminster Fuller, inventor of the Dymaxion House and the Geodesic Dome. In the 1960s and 70s "futures studies" - based on the analysis of possible futures and their causation patterns - became fashionable both in the United States and in Europe. While the American branch of futurology tended to focus mostly on practical projects - Stewart Brand's Buckminster Fuller-influenced counter-cultural Whole Earth Catalog being one of the most notable - in Europe there was a tendency to prefer theoretical speculations about the long-range future of humanity and the Earth. Although nowadays futurology is a term that - in a Western context, at least - mostly belongs to a bygone era, the term "futures studies" has survived, and still represents a considerable body of scientific, pseudoscientific, sociological and historical research associated with ecology and sustainable development.

In the Soviet Union futurology developed along rather different lines, and was mainly associated with government-controlled national economic, industrial and defence projects. Even today, more than twenty years after the fall of the Berlin Wall, the study of military futurology is alive and well in Russia, where it provides an underpinning and rationale for the current large-scale modernization and expansion of the country's military and defence capabilities. A glance at the website of the Russian Armed Forces broadcasting company Zvezda reveals a wide range of documents and videos devoted to the subject of Russia's place and role n the world, while journals like Voyennaya Mysl' (Military Thought) and Voyenno-Promyshlennyi Kur'yer present many articles and links to material of a more detailed kind.

As Stephen Blank points out in a recent Eurasia Daily Monitor article, the central task of institutions like the Academy of Military Sciences is to predict and assess military and other threats to Russia, and to elaborate ways of reacting and responding to them:


For Russian writers and officials, not only will contemporary and future war be a war of high-tech precision-strike complexes, it will also encompass a broad range of information warfare or even attempts at creating major economic disasters through conventional, non-nuclear, high-tech, precision strikes. This involves war from earth (or in the case of submarines underwater) to space to the digital realm. Indeed, Russia plans to create cyber warfare units by 2017 (RIA Novosti, January 30). Similarly Russia’s long-range aircraft will start using foreign airfields in 2014 to perform their missions (Interfax-AVN Online, January 22). Furthermore, writers like Konstantin Sivkov, First Vice President of the Academy of Geopolitical Problems, call for imitating the United States’ move to a global strike capability using non-nuclear missiles. This capability is ostensibly for use against terrorists, but clearly also encompasses major theater war (Voyenno-Promyshlennyi Kuryer Online, January 22). Colonel Sergei G. Chekinov (Reserve) and Lieutenant-General Sergei A. Bogdanov (Ret.), prominent writers on information operations, even argue that “non-traditional forms of armed struggle will be used to cause earthquakes, typhoons and heavy rainfall” that can damage not just the economy, but aggravate the overall socio-psychological climate in any targeted country (Military Thought, October–December 2013).

Posted by David McDuff at 3:27 pm No comments:


"While solving in part the security issues in Sochi by implementing restrictions on the movements of broadly defined hazardous population categories, Russian government also draws the line separating the North Caucasus from the rest of the country. The solution may look attractive to the security officials, but the price for such a solution is that the North Caucasus is de facto becoming increasingly less and less associated with the Russian Federation."

Posted by David McDuff at 12:41 pm No comments:

A group of researchers and specialists in the field of Ukrainian nationalism studies, headed by Andreas Umland, has posted a statement and petition addressed to journalists, commentators and analysts writing and broadcasting about the EuroMaidan protest movement.

In particular, the statement focuses on the role of far right groups in Ukraine’s protest movement, and a warning about the Russian imperialism-serving effects of some supposedly anti-fascist media reports from Kyiv.

The statement notes that


the movement as a whole merely reflects the entire Ukrainian population, young and old. The heavy focus on right-wing radicals in international media reports is, therefore, unwarranted and misleading. Such an over-representation may have more to do with the sensationalist potential of extremely ethnonationalistic slogans, symbols or uniforms than with the actual situation, on the ground.

We even suspect that, in some semi-journalistic reports, especially those in Kremlin-influenced mass media, the inordinate attention to far right elements in Ukraine’s protest movement has nothing to do with anti-fascism. Paradoxically, the production, biases and dissemination of such reports may themselves be driven by an imperial form of ultra-nationalism - in this case, its Russian permutation. By fundamentally discrediting one of the most impressive mass actions of civil disobedience in the history of Europe, such reports help to provide a pretext for Moscow’s political involvement, or, perhaps, even for a Russian military intervention into Ukraine, like in Georgia in 2008.

On his blog the researcher and editor Anton Shekhovtsov has provided a detailed analysis of the pro-Kremlin network behind the anti-Ukrainian defamation campaign now being conducted in various branches of media and online. Shekhovtsov writes that


There has been a huge tide of false, incorrect and bloated reports that exaggerate or over-emphasize the significance of the far right in the current Euromaidan protests in Ukraine. A Moscow-based journalist Alec Luhn writes in The Nation about "the Ukrainian nationalism at the heart of ‘Euromaidan’", a leftist Seumas Milne argues in The Guardian that "in Ukraine, fascists, oligarchs and western expansion are at the heart of the crisis", while a self-styled "independent geopolitical analyst" Eric Draitser, in his nauseatingly misleading piece for his own Stop Imperialism (later re-published by The Centre for Research on Globalization), even goes so far as to claim that "the violence on the streets of Ukraine [...] is the latest example of the rise of the most insidious form of fascism that Europe has seen since the fall of the Third Reich".

These and many other similar articles are all written according to the same pattern, and their aim is to discredit the Euromaidan protests as the manifestations of fascism, neo-Nazism or - at the very least - right-wing extremism.

Posted by David McDuff at 12:55 pm No comments: