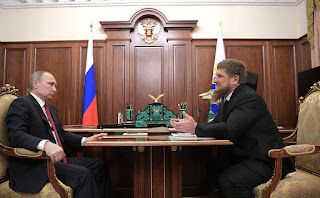 My post about the Novaya Gazeta reports of gay men fleeing Chechnya was reprinted in The Interpreter, where it has apparently attracted some comment, not all of it favourable. It seems that my suggestion that the reports may be part of an organised Kremlin disinformation campaign has upset those who are (rightly) concerned about the position of gay people in the so-called Chechen republic. Protest, in the view of these posters, should be directed at the Chechen nation, which has shown itself to be homophobic. Most of these commenters also see Ramzan Kadyrov as the Chechens' 'leader', thus accepting Moscow's narrative.

It is surely not necessary to remind readers that the Chechen people have only very recently emerged from two prolonged genocidal assaults inflicted on them by their Russian neighbour. These assaults having failed in their purpose, the Kremlin is now evidently keen to engage in a different kind of war, a war of smears and innuendo. By projecting an image of the Chechens as homophobic, the Kremlin is attempting to draw the attention of Western liberals away from its own catastrophic deficiencies towards a different target, one that can also be shared conveniently under the banner of the 'war on terror'.

In my post I mentioned timing. The timing of the reports was cynical because this issue emerged into the daylight at a time when Russia and America were increasingly in close - if controversial - contact with each other. Americans had begun to turn their attention to Russia and to take an interest in what happens there. So the Kremlin evidently felt a need to underline its position on Chechnya, Islamism and the 'war on terror' by unleashing a campaign to smear Chechnya in the minds of American liberals. It's an old tactic, and it probably works.

Chechnya has a noble and resilient culture that was admired by several nineteenth-century Russian authors, including Lermontov and Tolstoy. To dismiss this as being far away and in another galaxy is wrong, in my opinion - Chechnya has its own history and time frame, and the fact that its legitimate government has been exiled, and its population taken hostage by an irrelevant Kremlin-backed thug, a bandit, is something that is actual, not superannuated. Tolstoy would understand the present situation well, and would not be surprised by it.

The irrelevance of Kadyrov lies in his illegitimacy - he is only a puppet, and his authority is based on threats and intimidation. The Chechen people are better than Kadyrov, and in the right conditions are able to produce authentic leaders of the calibre of Dudayev, Maskhadov and Zakayev. That these leaders are routinely slaughtered by the Russians is not the fault of the Chechens.

It's high time that Western journalists stopped swallowing the Kremlin's propaganda. Homophobia, though prevalent, is probably not much more widespread in Chechnya than in other regions of Central Asia, and indeed in Russia itself. It might be useful if a few journalists were to interview Akhmed Zakayev, the legitimate leader of Ichkeria (the Chechen name for Chechnya), who now lives in London, and seek his views on the real reasons for the current anti-Chechen campaign.

Chechnya - Image and Reality
Posted by David McDuff at 9:13 am