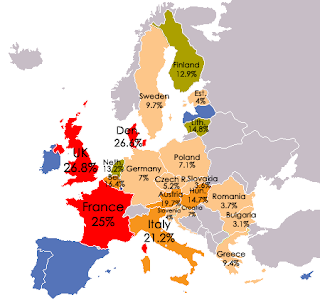 
In 2016, the two states that had done the most to construct the liberal order—the United Kingdom and the United States—seemed to turn their backs on it. In the former, the successful Brexit campaign focused on restoring British sovereignty; in the latter, the Trump campaign was explicitly nationalist in tone and content.

Looking for reasons to explain the populist resurgence, the authors settle on what they perceive to be the 'hijacking' of globalisation by a 'capitalism' (economic empire-building) that has, in their view, left the ordinary person behind. Traditional political parties, in their estimation


must do more than rebrand themselves and their ideas. They must develop substantive policies that will make globalization serve the interests of middle- and working-class citizens. Absent such changes, the global liberal order will wither away.

A related article by Atlantic Council researcher Alina Polyakova examines the way in which European centre-right parties, dismayed by the rise of the populist far right, attempt to mimic their right-wing rivals by adopting similarly illiberal policies, and are then surprised to discover that the electorate prefers the undiluted populism of groupings like Front National to the ersatz versions offered by traditional parties. With concern, she emphasises that because of this the centre right


across the world should not give in to the far right, and the center left must stand firm on progressive principles that channel voters’ anxieties rather than feed them.

Polyakova focuses on France and the Netherlands: but the United Kingdom, not discussed by the author in her piece, faces a similar displacement of political forces: Mrs. May's government has adopted nearly all the policies of its fringe rival UKIP.  Here the process appears to be developing in a way that contradicts the author's argument: far from losing support, the May government is actually increasing its lead over the steadily shrinking opposition, mainly by espousing the positions of the populist right. Tory conservatism, once identifiable as centre-right, is drifting further and further away from the centre -- and a right-wing, pro-hard Brexit Tory government already looks like the victor in the forthcoming general election.