The Russian Government and the 1999 Apartment Bombings 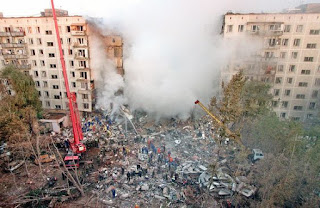 I have noticed on Twitter that some observers have been recalling Amy Knight's review of John B. Dunlop's book The Moscow Bombings of September 1999. It's quite a remarkable read. In addition to summing up the conclusions of Dunlop's investigation it brings into sharp relief aspects of the bombings that have not to the best of my knowledge been widely discussed:


Dunlop explains why the political situation in which the terrorist attacks took place is crucial for understanding them. Yeltsin and his “Family” (an entourage that included his daughter Tatyana Dyachenko, Yeltsin adviser Valentin Yumashev, who later married Tatyana, the oligarch Boris Berezovsky, and Aleksandr Voloshin, head of the presidential administration) were facing a huge crisis by the spring of 1999. Yeltsin was in ailing health and suffering from alcoholism. His popularity had fallen steeply and there was a strong possibility that his political base—a loose movement called “Unity”—would lose the parliamentary and presidential elections (respectively scheduled for December 1999 and March 2000). Yeltsin and his two daughters were facing reports charging that they had large amounts of money in secret bank accounts abroad through illegal transactions with a Swiss construction firm called Mabetex. And Berezovsky was under investigation for embezzlement when he had been running Aeroflot.

The Family’s solution to its dilemma, according to Dunlop, was a plan to destabilize Russia and possibly cancel or postpone the elections after declaring a state of emergency. In June 1999, two Western journalists, Jan Blomgren of the Swedish newspaper Svenska Dagbladet and Giulietto Chiesa, the respected, longtime Moscow correspondent for the Italian newspaper La Stampa, reported that there was going to be an act of “state terrorism” in Russia. The goal would be to instill fear and panic in the population. Chiesa wrote:


With a high degree of certitude, one can say that the explosions of bombs killing innocent people are always planned by people with political minds who are interested in destabilizing the situation in a country…. It could be foreigners… but it could also be “our own people” trying to frighten the country.