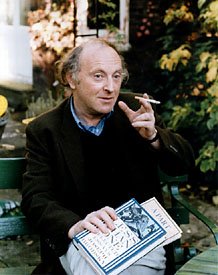 Natasha Rulyova recently asked me some questions about my experience of translating Joseph Brodsky, for a book she is writing. I ventured the following replies:

It appeared in Stand, not Strand.

and Vogue (May 1980). Subsequently, Joseph Brodsky (JB) revised it after publication.

- Did Joseph Brodsky (JB) ask you to translate Strophes or was it your initiative?

One afternoon when I visited him at 44 Morton Street he asked me to translate the poem. He told me he had been keeping it for me.

- Do you know whether any other translators were approached to do the job?

No, but it’s possible to suppose that they weren’t.

- Have you ever seen any other versions of the poem?

No, apart from the revised versions of ‘our’ translation which Joseph published during his lifetime.

- Did JB try to translate it himself independently?

Yes, I believe so.

- JB had already started translating some of his own poems from the Russian when you translated Strophes. His auto-translation of December in Florence appeared roughly at the same time, in 1980. Why do you think did JB want you to translate Strophes rather than do it himself, taking into account that his control over his English translations was about to start growing?

As far as I could tell, Joseph regarded Strophes as something apart from the rest of his production at that time. For him it seemed to represent a statement that was acutely personal, and one he wasn’t sure very many people would understand. He wanted the translation to be a process of understanding.

- To what extent did JB interfere with your translation and at what stages?

He didn’t interfere much with the actual writing of the ‘final’ translation, but we had at least two long sessions where he went through various drafts of the individual stanzas with me and made suggestions. It was a sort of extended discussion, and it took quite some time.

- Did he try to russify your translation?

- Did he attempt to make it less ‘smooth’?

- If not, how would you describe the changes he suggested? Did you agree with all his suggestions?

As far as I know, I accepted nearly all his changes, which seemed to stem from his own conviction and certainty about what he was saying. There are a few problems with the translation which haven’t been resolved – as in the lines

Like our thirty-third letter
I jib all my life ahead.

where the second line is still only a very approximate rendering of the Russian, but which represents Joseph’s preferred choice.

I think it needs to be remembered that for Joseph the process of translating his own poems was in many ways not ‘translation’ in the usual sense at all. He used to talk of ‘throwing away the original, as it’s not important now’. The idea was to create a new poem in English – and that was going to involve reliving some of the same existential tensions that had led to the writing of the Russian version. I always felt that the conventional kind of ‘translation’ had negative meanings for Joseph – he tended to regard it rather as Mandelstam did. The important thing was to create something new and alive that worked in the host language. Innokenty Annensky, of whom I’d made a special study and whom Joseph greatly admired, also took this approach.

- Did you consult anybody while you were translating Strophes?

- How did JB make his suggestions/corrections: on your manuscript in your presence, after publication without consulting you, or any other?

Essentially we made the translation together, as part of an ongoing conversation – I made changes to my own drafts on pieces of paper, and submitted them for his approval. And he made his. Each stanza of the poem was treated almost like an individual poem in itself – a kind of rhyming haiku. We also translated some poems of Tsvetaeva at about the same time by a similar process, though it was almost exclusively oral, and didn’t involve much writing down. I only saw the results when Joseph had two of the translations published in the New Yorker, under the pseudonym "F.F. Morton". The idea was that 44 Morton Street had done the translating.

- In the Beinecke library JB archive, I saw a reference to your translation of the poem ‘On the Death of a Friend’ which, according to the reference, has not been published. Did JB ask you to translate the poem?

I think it was in a group of about four poems he gave me to translate, but also gave to Alan Myers, Daniel Weissbort, George Kline, and someone else.

- Do you still have this translation?

- Why was not it published?

- Whose decision was it not to have it published?

- Did JB make any changes in it?

Once again, I don’t know.

- Have you translated any other JB’s poems which were not published?

I translated part of The Thames at Chelsea, but Joseph preferred Alan Myers’ version of the complete poem.

- What were the reason for not having them published?

I think I’ve explained the situation above.

- In From Russian with Love, Daniel Weissbort notes that he felt more ‘proprietorial’ about his translations of JB’s poems than Alan Myers who saw his translations as ‘versions’, or ‘drafts’. How would you describe your relationship with your translations?

I always saw them as open-ended drafts, which were under Joseph’s control – they were his poems, and I tried to help to find an English idiom in which to phrase the English versions of the few that I got involved with. It may seem strange, but the translation of Strophes was really an extension of the conversations we were having at the time, both about the poem itself and about other matters, rather than a literary text as such. I felt that this improvisatory process was one of the ways in which Joseph gauged the personal characteristics of his translators and of other non-Russians who surrounded him. The translations were a kind of test – not so much of linguistic or literary skill, though that mattered, of course - as of existential authenticity. I was never sure whether I passed or failed this test, though in our work together Joseph always insisted that I had passed it. I rarely had contact with his other translators.

He sometimes asked me to edit his prose texts – the short essay on Dostoevsky is an example, though it needed hardly any changes. I also read and commented, at his request, on some other texts he had written, but I don’t remember what they were now.


My translation of Strophes is here.