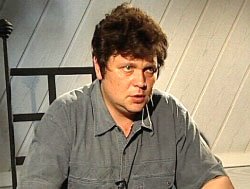 From PRIMA, news of the opening in Nizhny Novgorod of the legal case against Stanislav Dmitrievsky, editor of "Legal Defence" (Pravo-Zashchita) and executive director of RCFS, the Russian-Chechen Friendship Society, who is accused of "inciting racial, national and social hostility."

On Sept. 2, 2005, charges were filed against Dmitrievski based on Statute 282 of the Criminal Codex of the Russian Federation - “actions, aimed at inciting animosity and hostility, as well as humiliation of human dignity of representatives of either group based on gender, race, nationality, language, origin, religion, or belonging to a certain social group.” If convicted, the defendant can face up to five years in prison. The charges were filed in January of this year based on the publication in “Legal Defense” newspaper of a statement by Aslan Maskhadov and Akhmed Zakaev that called for a peaceful resolution of the Russo-Chechen conflict. The published statement contains scathing criticism of the Russian government's actions, the Russian military forces and, specifically, President Vladimir Putin. The defense counsel consider the above mentioned accusations to be politically motivated and in direct violations of the constitutionally-guaranteed freedom of speech right.


Update: Interfax is reporting that the opening of Dmitrievsky's trial has been delayed until November 25.
Posted by David McDuff at 11:00 pm