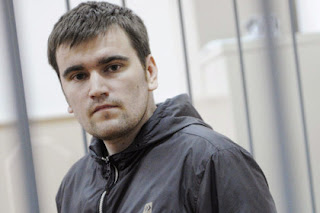 Today is a day of solidarity with Alexey Gaskarov, a Russian civic activist and member of the Opposition Coordinating Council.

On April 28 2013 Alexey Gaskarov was arrested in Moscow. The Investigative Committee of the Russian Federation has charged him with taking part in a riot and using violence against a policeman on May 6 2012, when OMON (Russian riot police) attacked a peaceful demonstration.

On May 6 2012  Alexey was beaten up by police during an anti-Putin demonstration on Bolotnaya Square for intervening to help a demonstrator whom the police were dragging along the asphalt. Alexey filed a complaint with the Investigative Committee, but no criminal case against the officials responsible was opened.


But the Investigative Committee didn't forget about him. On April 28, 2013 he was seized on the street when he went out to the local pet store to buy food for his cat.

According to reports, Alexey is now being held in Moscow's SIZO-5 pretrial detention center.