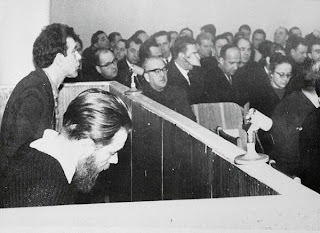 Underlining the literary nature of the rights defending movement, in 1965-66 the authors Andrei Sinyavsky (Abram Tertz) and Yuli Daniel (Nikolai Arzhak) were tried and sentenced to long terms of imprisonment  for works of fiction - short stories and novellas - they had written and then published in the West. The charges related to "anti-Soviet agitation and propaganda", though the prosecution had difficulty in proving intent to do harm, and after the trial additional clauses had to be added to the penal code. Alexeyeva points out that while the rights defending movement had hitherto been largely the concern of the young, this trial drew the attention of a much wider cross-section of Soviet society, including the middle-aged, middle-class technological sector.

Another feature of the trial was the letter-writing campaign begun by Yuli Daniel's wife, Larisa Bogoraz. Initially the letters  to representatives of the authorities, in particular the public prosecutor, were private and signed by her alone, like the letters that had earlier been written by others in support of Pasternak and Brodsky. As time went on, however, more signatories joined her, until the public "open letter" was born. After the harsh sentences passed on dissidents like Alexander Ginzburg, Yuri Galanskov, Vera Lashkova, Alexander Dobrovolsky, Vladimir Bukovsky, Viktor Khaustov and others, such letters were signed by as many as 700 people, most of whom fell victim to repression of various kinds: exclusion from the Communist Party and expulsion from university followed by loss of employment.

The rights defenders began to adopt other methods of exerting pressure on the authorities, including the circulation of petitions. Alexeyeva comments that the petitions against re-Stalinization and repressive judicial decisions were an indication that the USSR was beginning a transition from a totalitarian state to an authoritarian one - the petition had been an instrument used by the pre-1917 opposition in Russia, and its reintroduction suggested a return to earlier methods of democratic resistance.

The protests against the Soviet invasion of Czechoslovakia in 1968 developed the rights movement even further - Alexeyeva likens it to the growth of mushrooms. In Andrei Amalrik the movement acquired its first "specialist" in making contacts with supporters in the West: the institution of tamizdat was born, not only bringing in previously unavailable foreign texts but also books by Russian-language authors: Alexeyeva lists works by Sakharov and Amalrik, Anatoly Marchenko's My Testimony, Vasily Grossman's Forever Flowing, Lidiya Chukovskaya's Moscow to the End of the Line, Alexander Solzhenitsyn's Cancer Ward and The First Circle, and poetry by Iosif Brodsky, among others.