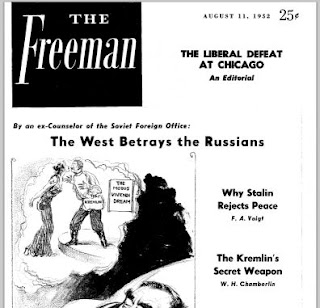 Many of the articles in early issues of the Foundation for Economic Education's journal The Freeman still have a relatively modern resonance. In spite of their deep entanglement in the Cold War espionage and un-American activities debates of the day,some of the discussions of U.S.-Soviet relations in the August 1952 edition were still relevant more than 30 years later. Fascinating items include an appeal for an end to Western appeasement of the USSR by the double defector Igor Bogolepov (alias Ivar Nyman), with his account of how passive resistance could bring the Soviet system down if only there was co-operation with the resisters on the part of the West, and his "confession" about his own duplicitous behavior:


Thus, during the years 1923 to 1942, I was personally connected with the Communist business of selling to the West a false picture of an innocent, peace-loving, arch-progressive and democratic Soviet regime. At first I was none too pleased to be associated with this "operation confusion" carried out by my boss, Maxim Litvinov. But since it was impossible to live in the Soviet Union without somehow serving the Communist cause, I said to myself: "I might as well remain where I am, because if a real Communist takes my place here at the Foreign Office, then who is going to throw monkey wrenches into this monkey business?"

So I began to sabotage in my own field as my fellow-countrymen all around me were sabotaging in theirs. Although it was not in my power to alter Soviet strategy, I could at least try to make its execution less effective. I always overemphasized the legal or factual difficulties in the way of carrying out political moves. Or I tried to soften their effect. And whenever I was charged with conveying Soviet propaganda to the West, I did my best to make it as unfit for the Western mentality as possible. This was not difficult, since the censors were mostly sharp, uneducated boys from the Secret Police who preferred to have articles from Pravda, and other propaganda for home consumption only, translated into foreign languages with very little alteration.