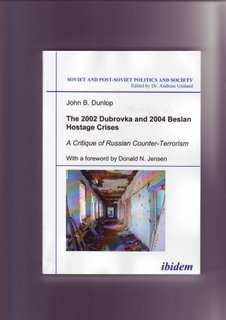 I've started to read John Dunlop's study of the Dubrovka theatre siege and the Beslan hostage crisis. As the book's publicity points out, it contains by far the most complete reports available in English on the two major terrorist incidents. The issues examined are:

• the backgrounds of the Muslim extremists who carried out these acts including the de facto leaders of the terrorist assaults, ethnic Chechen Ruslan Elmurzaev and Ingush Ruslan Khuchbarov;
• the failure of Russian law-enforcement to prevent these two incidents, documenting both the massive corruption of the Russian security services and police and the absence of the rule of law;
• the storming of the Moscow theatre building and of the school at Beslan by Russian police, aided by the military, elucidating the reasons for the very large loss of life in both incidents;
• the use by the Russian police of a special gas at Dubrovka and of tanks and flamethrowers at Beslan;
• the evident fixation of the Putin leadership with portraying these two assaults as incidents of international Islamic terrorism linked to the Al-Qaeda network;
• and the repeated attempts on the part of the Russian authorities at the time of these incidents to weaken the influence of moderate Chechen separatists headed by the late Asian Maskhadov.