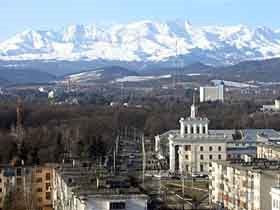 Kasparov.ru cites an Ekho Moskvy report of mass searches and arrests which began on April 27 in the southern Russian town of Nal'chik, capital of the Kabardino-Balkar republic. Those detained included people who had earlier been marked on "blacklists", and also widows of the guerrillas - two thirds of whom were local residents - who died in the attack on Nal'chik on October 13 2005.

Fatima Tlisova, editor-in-chief of IA Regnum's Caucasus division, is quoted as saying that her parents' house was searched by the authorities, and that she connects the search with her activities as a journalist.
Posted by David McDuff at 9:56 am