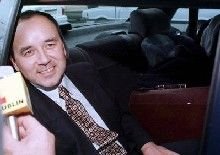 "I demand this not only because he's a former Polish ambassador, but also because he's a man who needs some medical care at this moment" - said Marcinkiewicz after the meeting with Maszkiewicz's father - who has begun a hunger strike in front of the Ministry of Foreign Affairs.

The chief of government has given assurances that the Polish side has taken all "necessary actions" and will work more for the release of the former Polish ambassador.

Marius Labentowicz writes that "there was an interview published in Rzeczpospolita with Pavel Sheremyet - a Belorussian journalist with Russian passport who was also jailed, later released but spent a few days in same cell with Maszkiewicz. He said that the Georgians and Poles are treated the worst in jails. In the cell he and others played chess (made from bread) with Maszkiewicz, who was telling stories to his cellmates about Solidarity and gen. Jaruzelski."

RFE/RL has a report here.
Posted by David McDuff at 9:20 am