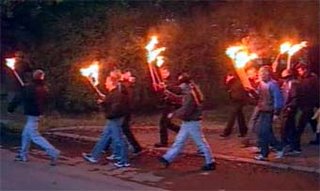 Has the Prosecutor General’s Office grown tired of the incessant campaign against it for effectively covering for fascists by opening criminal cases that are not based on the “ethnic” statutes? Or are we starting to see a realization of that political scenario which has long been mentioned as one of the most probable during 2007-2008 – the government against the fascists?

Unfortunately, it’s hard to give much credit to the theory that the government has addressed this problem simply because it has decided not to disgrace itself.

Ivan Grushin in Lenta.ru, on the ongoing series of racially-motivated attacks on the streets of Russia's cities, and the government's response.
Posted by David McDuff at 6:51 pm