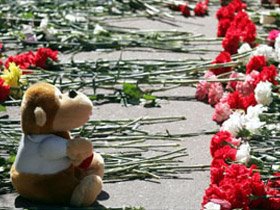 A statement by Ella Kesayeva, spokesperson for the "Voice of Beslan" NGO and support group for the victims of the 2004 Beslan tragedy, is published today on the Kasparov.ru web site. She describes how the organization has been subverted by the authorities, who have infiltrated their representatives into it in an attempt to destroy it. Now the officially-sponsored breakaway group has seized the NGO's offices, and Kesayeva says she believes this action is connected with the fact that Voice of Beslan recently published a public protest against a third term for Vladmir Putin as Russian President.
Posted by David McDuff at 10:28 am