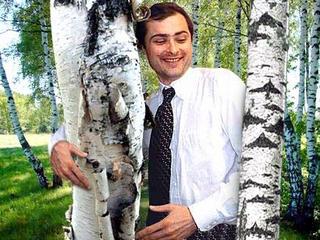 In Yezhednevnyi Zhurnal, Leonid Radzikhovsky draws a portrait of Putin crony Vladislav Surkov, whose secret speech has caused some ripples, and whom some have tipped as a possible successor to the great dictator. An excerpt, in translation:

Before us is the speech of a clever, conservative, cynical, patriotic, very Russian public official. His words (with suitable corrections for the age) could be endorsed not only by Pobedonostsev or Witte, but, what is most comical of all, even by V.I. Ulyanov, who broke his head against the reality of Russia and at the end of his life himself became... a despairing Russian conservative!

Perhaps we might begin with Ulyanov. In his secret (just like Surkov’s speech!) "Letter to the Congress" he wrote that they, the ruling elite, were the "thinnest layer", "a drop in the ocean of the people", and trembled with fear before the "small internal struggle in this layer", which would overturn his entire supremacy.

Well, thank God, we don’t have a dictatorship, the severity of the problems is not the same at all - but the problems are the same.

The thinnest layer of a closed elite – plus "140,000,000 very poor and complex people" (Surkov).The binary structure of society has not changed… for how many years, exactly?

Since the days of the Leninist nomenklatura? Since the time of Witte? Since the 19th century? But what good is it if the structure of society (the “superstructure” ) changes, but the “base” doesn’t change one iota? Agrarian Russia has become a source of raw materials, that’s all. Not estates of wheat but estates of petroleum, and the estate owners are not the Counts Vorontsov-Dashkov, but the Abramoviches and the Millers, the Bogdanchikovs and the Alekperovs... But in other respects everything is as before: a country of exports and poverty ("we shan’t eat it all – we’ll export it"), a Eurasia/Aziopa that lives “off the land”.

What about social psychology?

You've only got to begin to do anything to find out how few honest, honourable people there are. Sometimes, when I can't sleep, I think: "Oh Lord, you've given us huge forests, infinite fields, and endless horizons, and we, living here, ought really to be giants."

What’s this? The night thoughts of Mr. Surkov after a meeting with Unity Party MPs ? No, it’s The Cherry Orchard by Mr. Chekhov, 1904.